Natsuho Tsumura and Reiko Shintaki, master's students at the Graduate School of Science and Technology, Keio University (at the time of their research, they will finish in 2019 and 2022 respectively), and Associate Professor Koji Jimura of the Department of Life Information, Faculty of Science and Technology, in collaboration with Professor Kiyoshi Nakahara and Specially Appointed Professor Masami Takeda of Kochi University of Technology, and team leader Junichi Chikazoe of Araya, Inc. They found that signal transmission between the prefrontal cortex and occipitotemporal cortex via the superior temporal sulcus of the human brain is reversed when inappropriate behaviour is inhibited in situations where there is uncertainty about information about the external world. The findings indicate that response inhibition, which is dependent on perception of the external world, is achieved by a prefrontal-temporal lobe circuit centred on the superior temporal sulcus. They also illustrate that the functions of advanced cognition, which are unique to humans, are realised by large-scale, sophisticated neural circuits. The study was published on 2 May in the preliminary edition of The Journal of Neuroscience, published by the American Society for Neuroscience.

Reducing inappropriate reactions is a control function of cognition to adapt to a changing environment. For example, we ensure our own safety by proceeding when the traffic light at an intersection is green and stopping when it is red (Fig. A). This 'response inhibition', which suppresses inappropriate reactions, is known to be an important control function in humans involving the prefrontal cortex of the right cerebral hemisphere.
However, in our daily life, important information around us is not always appropriately discriminated. In the example of signals, colours can be difficult to distinguish. For example, if a traffic light is a mixture of green and red colours, it can be difficult to determine whether to proceed or stop (Fig. A). Even if the signal does not actually emit a mixture of red and green, it is often difficult to distinguish the colours due to sunlight. However, previous studies of response inhibition have assumed that the situation under which the action is taken can be clearly discriminated.
On the other hand, in studies of 'perceptual decision-making', which investigate how discrimination changes by manipulating the ambiguity of perceived information, it is known that the occipitotemporal cortex depends on the style of visual information (e.g. movement) to guide discrimination. The research group ,therefore, asked the question: 'What mechanisms in the prefrontal and occipitotemporal cortices of the brain accomplish response inhibition in situations of perceptual ambiguity?'

The research group first created a visual stimulus that manipulates the ambiguity of movement. In this stimulus, several small dots were presented, each of which moved up, down or randomly (Fig. B). The perceived ambiguity was manipulated by the randomness of this movement.
When presented with this stimulus, human subjects were required to decide whether to press the button or not (i.e. suppress the response), depending on the direction of movement of the whole point. These are called GO trials and NO-GO trials, respectively (Figure B, right). Functional MRI was then used to measure human brain activity during GO and NO-GO trials.
The higher the ambiguity of the point movement, the more difficult it is to perceive the movement and therefore the more mistakes are made. Importantly, the increase in errors was greater on N0-GO trials than on GO trials (bottom right of Figure B; statistically referred to as an interaction effect). This indicates that higher perceptual ambiguity makes response inhibition itself more difficult. 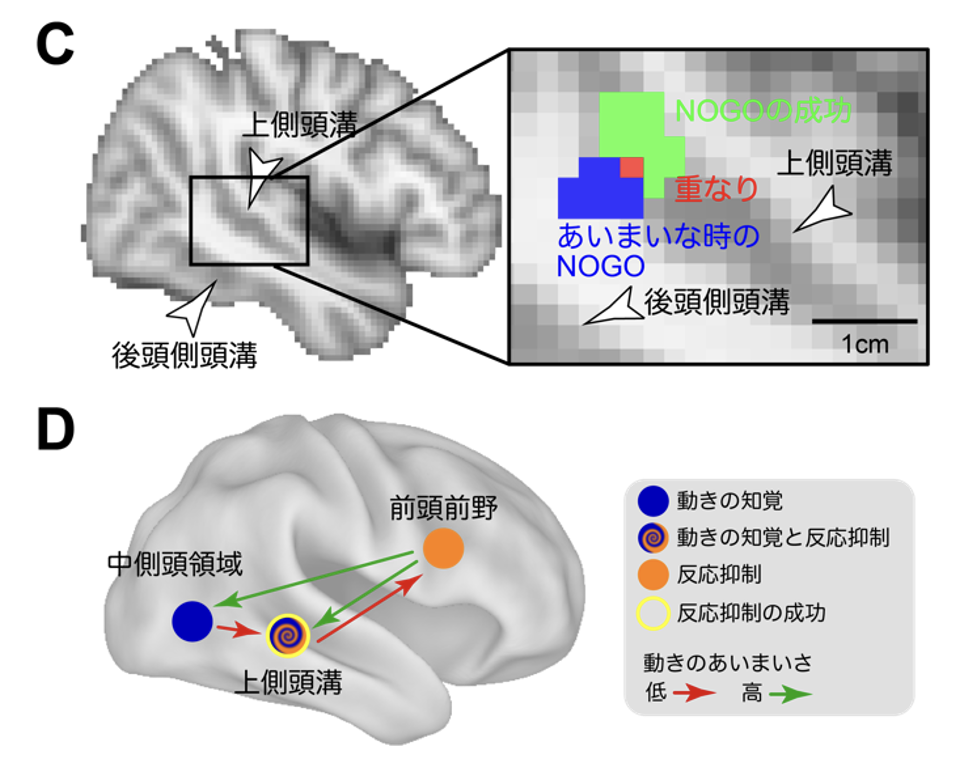 Through this trilogy, we feel that we have achieved a scientific breakthrough by providing a coherent account of the brain mechanisms underlying executive control of cognition and perceptual decision-making. First, we would like to verify the reproducibility and reliability of this trilogy. Then, I hope that researchers in related fields will follow up on the series of results and develop the field.
On the other hand, when we look at the series of results in detail, we realise that new questions arise and that there are many important problems to be solved. In the future, I would like to solve these problems steadily, accumulating results and approaching the solution to the ultimate question for mankind, "What am I?", using the methods of modern science.

back
back to news top
next
MENU
PAGE TOP