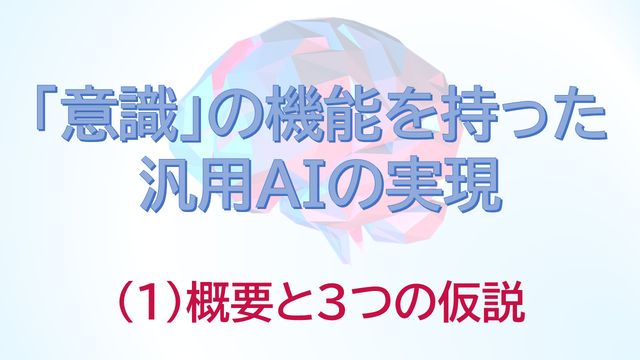 What kind of "consciousness" does a human being have - at ARAYA, we are continuing our research to answer this question. By creating an artificial equivalent of consciousness (AI), we are trying to get to the bottom of it and realize a "general-purpose AI".

We believe that when AI incorporates the function of consciousness, its capabilities will undergo a qualitative change.

Current ai is limited in what it can do. for example, it is useless if it goes beyond the scope of the knowledge it has learned. if you take a self-driving car that has been trained only on japanese roads and bring it to the us, it probably won't work. This is because traffic rules are very different. With current technology, Japanese self-driving ai will need to be re-trained with a lot of data tailored to the us environment before it can be used in the us.

In contrast, when a person who is used to driving in Japan tries to drive in the US, the car controls are basically the same, so as long as you pay attention to "stay in the right lane", you can drive quickly.

In fact, this is where the role of consciousness comes into play a little. We carry out many of our actions unconsciously. But this is because the environment around us is the same as it usually is. As soon as the environment changes, we become aware and act consciously. In other words, when we try to get around in a new situation, we are awakening our awareness.

If we can embed the functions of consciousness into AI, we can expect to see self-driving AI that learnt how to drive in Japan adapt quickly to American traffic rules, as well as AI that can be used for a variety of other purposes, such as being an attentive housekeeping robot or providing business advice. If general-purpose AI becomes a reality, the benefits to society will be far greater than those of today's AI, and it could lead to innovation in all sorts of industries, from agriculture, forestry and fisheries to manufacturing, distribution, telecommunications, finance, medicine and education.

We are not the only ones paying attention to the function of consciousness. Professor Joshua Benzio of the University of Montreal, Canada, one of the world's leading authorities on deep learning, has proposed the concept of "Consciousness Prior" (*1). This is an idea that would greatly enhance the capabilities of AI by incorporating a mechanism equivalent to consciousness.
1: Y. Bengio, "The Consciousness Prior," https://arxiv.org/abs/1709.08568

Professor Benzio likened today's AI to "System 1" (*2). System 1 refers to the reflexive thoughts that pop into our heads unconsciously. For example, just by hearing someone's voice on the phone, you can tell if they are angry. Today's AI, which excels at image and voice recognition, is only at this level, argues Professor Benzio.
2: Daniel Kahneman, translated by Akiko Murai, Fast and Slow, Hayakawa Shobo, 2012.

How exactly can we give AI the function of consciousness? We believe that we should draw on theories from cognitive neuroscience about the mechanisms that give rise to consciousness. In fact, there is no standard theory yet that explains how human consciousness arises. 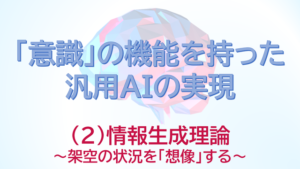